Shortly before the launch of Guild Wars 2: Heart of Thorns™, we revealed the full schedule of competitive events for 2016, which included two seasons of Pro League and a World Championship. Since that announcement, we’ve crowned our Season 1 champions, and we’re just a few days away from crowning our Season 2 champions. This leaves only one major milestone left in the calendar—the Guild Wars 2 World Championship. 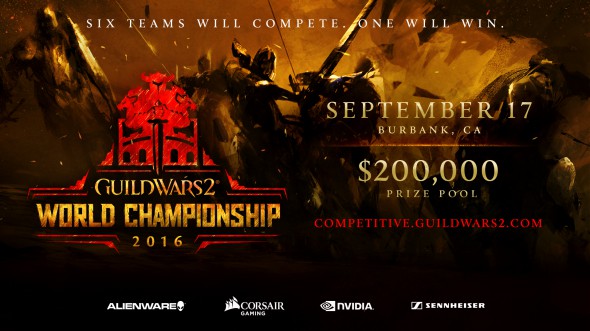 It is our pleasure to announce that ArenaNet is partnering with ESL, the world’s largest esports company, to host the Guild Wars 2 World Championship on September 17, 2016, at ESL Studios in Burbank, California. This single-elimination event will bring together three teams from North America and three teams from Europe to battle for a $200,000 USD prize pool—the largest in Guild Wars® franchise history.

To earn a spot at the World Championship, teams must first emerge victorious in the double-elimination qualifiers on August 6 and 7. There’s more on the line than the prize money; seeding in the qualifier event will be determined by overall regular-season placement in Season 2 of Pro League, as well as the final results of this weekend’s Season 2 Finals event. The qualifier will be open to existing Pro League teams. Tickets to the World Championship will be available for purchase a few months prior to the event for those interested in attending in person, and the event will be livestreamed on the official Guild Wars 2 Twitch channel.

We’ll see you in the Mists!