Behind the Teams: Q A with Rank 55 Dragons 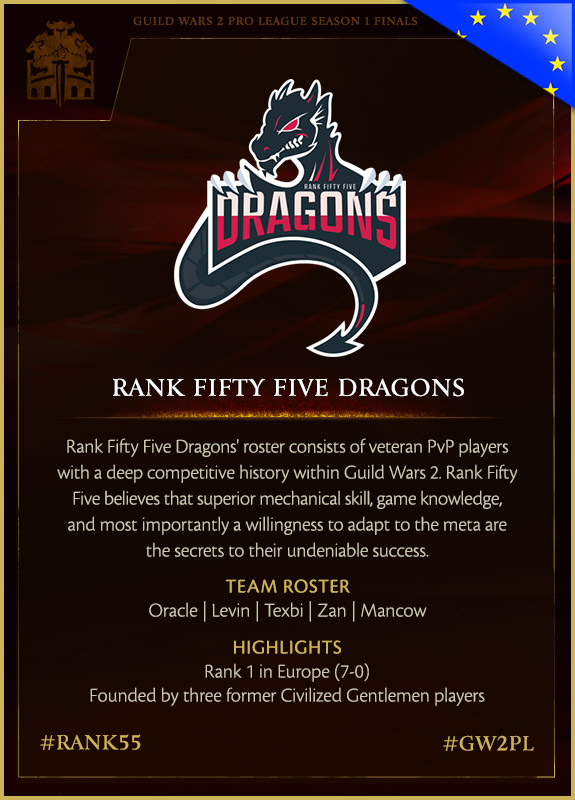 The ESL Guild Wars 2 Pro League finals are coming up on February 20, and you can learn more about each of the finalists in this series of Q&As. Today, meet the veteran PvP players of European team Rank 55 Dragons, made up of members Oracle, Levin, Texbi, Zan, and Mancow.

A: We think the game against the Civilized Gentlemen was the most important one. We considered TCG to be our strongest enemy, and winning against them put us in a really good spot.

Q: What do you believe was the deciding factor in winning your match against TCG?

A: In our last round versus TCG, we were quite behind, but we managed to wipe all four of their players at one point. Then we grabbed a triple cap, and they just could not come back from that.

A: The patch basically changed the game completely, and some of us are forced to learn new classes that we’ve never played or played with in a team before. Our main goal is to get as good as we can on these new classes and learn how to play with them as a team in a short amount of time.

A: In the first round on Battle of Khylo, we started the game very poorly. We had two 2v2s, and one of them was not in our favor. There is one play we did not do that made us lose the entire game—we had a portal on Clocktower, where the 2v2 that we were definitely going to lose was happening, and what we should have done was swap players in the bad 2v2 with a mesmer who was 1v1 to create good matchups. This would not put us ahead, but we wouldn’t have given Vermillion a huge lead.

A: First, watching streams on Twitch is really helpful. You learn a lot if you watch top PvP players. Second, you have to find players you enjoy playing with and start playing games with them; you don’t necessarily have to create a team right away. This forces you to learn how to be a team player, and you create synergy with them. Then you can join tournaments and start competing, and you will keep improving. That is how some of us started.

A: We consider all teams as a big threat. But if we would have to pick one, then it would probably be the Abjured, simply because they have played together for longer than any of us did as a team and competed in previous World Tournament Series and ended up taking the top places.

A: No. But we want to give a big shout-out to everyone who supports us.

A: In this season, it was the first time we had to change our playstyle completely. As we stated before, we were really used to playing a mesmer and thief combo and nothing else. But because we were forced to change due to balance changes, we learned how to adapt. We are forced to adapt again for the season finals, and that only makes us stronger for season two.

A: There is nothing that surprised us in our matches. What really surprised us though were some of the other matches, for example Orange Logo vs. Car Crash or Vermillion vs. the Civilized Gentlemen.

Q: When watching the Orange Logo vs. Car Crashed and Vermillion vs. TCG matches, what is something from each match that stood out to you or surprised you?

A: Orange Logo vs. Car Crashed, there was nothing really that surprised us, just the result. We were convinced that there was no way Orange Logo would lose against Car Crashed, who we consider one of the worst top EU teams. In TCG vs. Vermillion, VM definitely had a build advantage in the form of mesmer portals, which TCG did not expect to be a threat.

A: Staying calm and focused despite an environment that could make us nervous and stressed will be the main reason we are going to win in the finals.