Behind the Teams: Q A with Team PZ 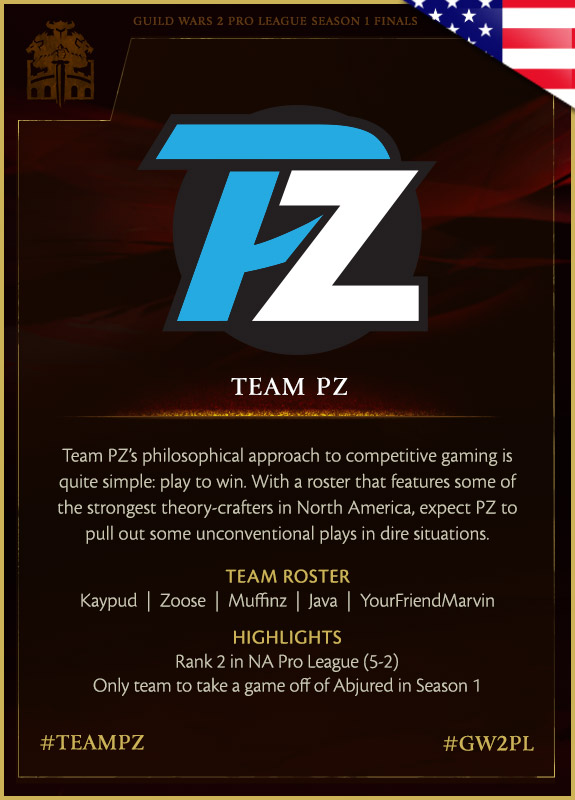 The ESL Guild Wars 2 Pro League finals are coming up on February 20, and you can learn more about each of the finalists in this series of Q&As. Today, meet the unconventional theorycrafters of North American Team PZ, made up of members Kaypud, Zoose, Muffinz, Java, and YourFriendMarvin.

A: When we beat Ez Pz Lemon Squeezy to guarantee entry into the season one finals, Zoose just shouted “We’re going to the finals, boys!” in TeamSpeak, and everyone just followed up with some happiness. So that felt really awesome.

A: Our most important aspect is getting down the teamplay to the point where everyone knows exactly what to do at every point in time, so there’s no time wasted and optimal gameplay at every second of the game. Obviously, if we change our composition and players we need those players to practice their new specs as much as possible so they can perform as well.

A: No. We’re just happy to have won out our last five games after an 0-2 start.

A: Probably memes and having fun with Java.

A: Something that we wish we would have known going into PvP is how to find players you think are really good and ask them to duel with you until you feel like you can beat them. Then move up from there to harder opponents, and finally integrate everything you’ve learned in small scale situations into teamplay.

A: We are playing Rank 55 Dragons first, so they will be our biggest threat.

A: Whenever some of our teammates would log into Skype, TeamSpeak, or Guild Wars 2, we would always have one fan named WinkyP who would say stuff like “Is that him?” and “Hey man, I’m a big fan!” and “Is that the real Kaypud/Zoose?” Eventually that caught on, and Kaypud and Zoose just started saying the things he said repeatedly and absorbed the memes. He’s one of our close friends now, and on February 6, we’re inviting a bunch of our friends and some pro players to watch Ratatouille with him for his birthday since he’s a big fan of becoming a chef! We love our boy WinkyP.

A: We definitely learned to not be too overconfident, which is what led to us losing our first game. Also to focus on playing our game first and practicing what we need to practice to win. Just focusing hard in general.

A: Never Lucky improving a lot throughout the season was surprising.