Behind the Teams: Q A with the Abjured 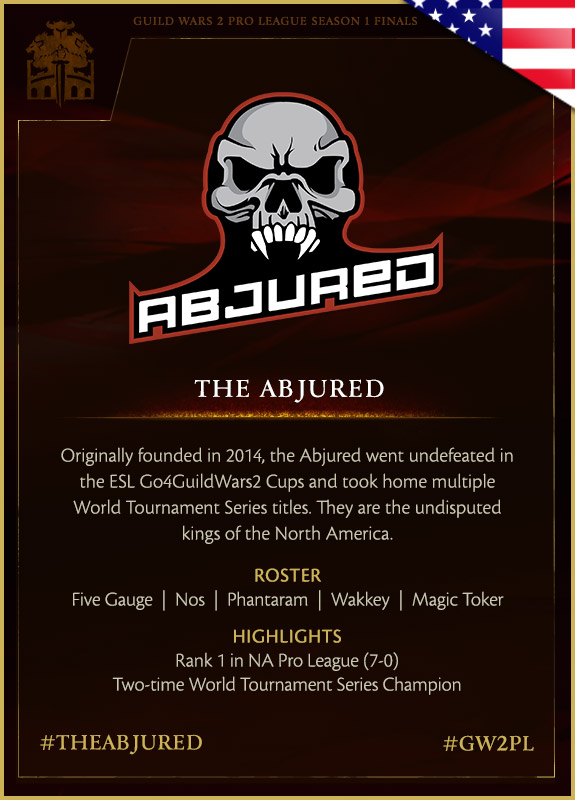 The ESL Guild Wars 2 Pro League finals are coming up on February 20, and you can learn more about each of the finalists in this series of Q&As. Today, get to know North American team and two-time World Tournament Series champions the Abjured, made up of members Five Gauge, Nos, Phantaram, Wakkey, and Magic Toker.

A: We don’t think that we had a truly defining moment, and instead it was our consistence in always being dominant and making the necessary changes to stay that dominant.

A: Working on adjusting to the new balance.

Q: What’s a part of the new balance that will change your play the most, or that’s most difficult to adjust to?

A: The faster pace of the game and lower resurrecting power of this new patch is something we’ve had plenty of experience with in the past. Coming out of the previous meta where it was slower paced with high resurrecting power makes this a challenge to adjust to, though.

A: The fact that we have been together as a team for over a year with the most stable roster.

A: One of the things we wish we knew as new players is where all of the places you can teleport to on the map are with skills such as Flesh Wurm and Blink. In terms of useful tips, we think one of the most important things you can do as a player looking to improve is to group with other people who share that similar desire and do practice duels with one another. Even hanging out with someone in a few queues can make the game more enjoyable and help you learn a thing or two.

A: Rank 55 Dragons. We have played against most of their roster in the past, and we know how good their players are. They are very good at rotations and cutting losses in disadvantaged situations.

A: A few of our members stream a lot, and it was really enjoyable for them to interact with their community by doing queues with them.

A: We are more versatile than ever as a team now because season one forced us to pick up other classes as we adapted to the meta, such as Toker going from thief to revenant.

A: Something that none of the community saw coming was when Apex Prime took their first loss of the season against Never Lucky.

A: As a team, we have a lot more LAN experience than any other team going. It can be really different adjusting to the new experience of cameras, a live audience, and even hearing the other team shouting.

Will the Abjured stay on top? Be sure to catch the ESL Guild Wars 2 Pro League Finals airing Saturday, February 20, at 8:00 AM Pacific Time (UTC-8) on the official Guild Wars 2 Twitch channel!