Behind the Teams: Q A with Vermillion 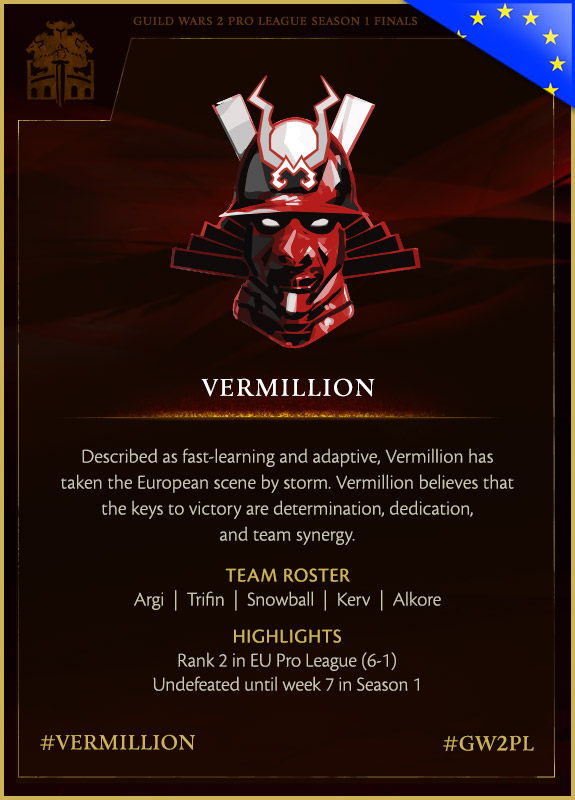 The ESL Guild Wars 2 Pro League finals are coming up on February 20, and you can get to know each of the finalists in this series of team Q&As! Today, meet the well-tuned machine that is European team Vermillion, made up of members Argi, Trifin, Snowball, Kerv, and Alkore.

A: We were really happy once we beat TCG in week five, since everyone gave 100% of their strength in those games and it paid out in the end, which made us get closer as teammates as well.

Q: What’s an area of improvement you’ll need to look out for going into the finals?

A: There is always an improvement everyone can make, but as a team it’s probably getting used to the new roles everyone has again.

A: We made a lot of mistakes versus Rank 55 Dragons, and since we lost, we learned a lot from those mistakes. So we guess it wasn’t that bad.

Q: What are some of the mistakes you felt you made against Rank 55 Dragons? What did you learn from them?

A: Putting the wrong class and spec versus another is pretty game deciding, but sometimes unavoidable. Rotations from the right player are key, and using a spec in a scenario where it’s meant to be.

A: Probably working together is our strength. We try to synergize with each other always, and it’s working out great.

Q: What are a few methods you use to foster good teamwork and create synergy?

A: There isn’t really a special method we use. We just try out stuff in scrims and do internal skirmishes to build up the synergy.

A: My first tip would be to learn the basics of each class and everything about each trait and how you exploit it for your own benefit. We learn the most whenever we off-class since we can see with our own eyes what each profession’s weakness is and exploit those weaknesses.

The second tip would be to just be consistent in the game. There is always something new to learn each day, and if you’re consistent, you could be the next Pro League player.

A: We respect every team that has made it to the finals, so we don’t really have a team that we won’t take as seriously as another one.

A: Not any particular moment, but we get a lot of support from our fans in the community, which we really appreciate.

A: Learning the pros and cons from your teammates and working on those. Putting each player in a position they’re comfortable with is always beneficial.

A: Our game versus the Civilized Gentlemen surprised us the most, since we were looking at them as our biggest threat.

Q: Why did you consider the Civilized Gentlemen the greatest threat to you, and what do you think led to your victory over them?

A: It was basically the game that would decide if we would go to LAN or not, and that’s why we considered them our biggest threat. We used our comp more efficiently than they did and won most team fights.

A: If we play like we’re used to, we should have good chances in the finals.

Stick together, Vermillion! Be sure to catch the ESL Guild Wars 2 Pro League Finals, airing Saturday, February 20, at 8:00 AM Pacific Time (UTC-8) on the official Guild Wars 2 Twitch channel.