Check Out Guild Wars 2: Heart of Thorns at Gamescom 2015 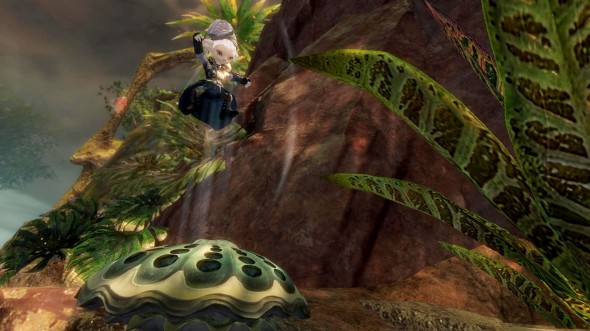 Greetings, Guild Wars 2 players! Once again, the ArenaNet team will be flying to Cologne in a few weeks for gamescom 2015. From August 5 to August 9, we’ll be at the largest European video-game event showing the first Guild Wars 2 expansion ever, Guild Wars 2: Heart of Thorns™. Our World Tournament Series Player vs. Player championships will also make an appearance at this year’s show, with a live tournament on the show floor pitting finalists from Europe, North America, and China in a fight for prize money and the coveted Tyrian lion trophy, “The Pride.”

As with last year, we’ll be partnering with our friends from Twitch, so you’ll be able to find us at the Twitch booth in Hall 9 in the consumer area. We’ll have game stations ready for you, as well as other activities for you to take part in. Let’s have a look.

Whether you’re a seasoned Guild Wars 2 veteran or a new visitor to the world of Tyria, we would love to have you come and stop by our space! We’ll have Guild Wars 2: Heart of Thorns in its latest playable iteration available at the booth, and if you come and try the game, you might leave with some goodies that our community team will be handing over exclusively to those who play the game.

We’ll also be celebrating the European finals of our World Tournament Series PvP tournaments on the big ESL stage. The final will take place on Saturday, August 8, and will involve four teams from different regions of the world facing off to win part of the $50,000 USD prize pool.

Starting at 10:00 a.m. CEST (UTC+2) on Saturday, you can watch all of the matches leading up to the WTS Finals on the official Guild Wars 2 Twitch channel. Stay tuned throughout the day, as we’ll also be revealing more about the future of PvP in Guild Wars 2 in between matches.

The WTS Finals will be livestreamed throughout the day by our international shoutcasting team in English, Spanish and Chinese.

We have more details available for you on our WTS special page right here.

You want to know more about Guild Wars 2: Heart of Thorns, and we know it. We’ll be running daily panels shown live through our official Guild Wars 2 Twitch channel and the official Twitch channel. We’ll cover topics such as the expansion, community discussion, and the World Tournament Series, and fear not—we’ll be recording these and making them available for viewing afterward in case you can’t make it to the live event.

Want to Be On Camera? Got You Covered!

Thanks to our partnership with Twitch, we’ll be equipping one of our booth’s PCs for streaming. We’ll stream every day from that machine to the official Guild Wars 2 Twitch channel, so you’ll have the chance to be in front of the camera and have other community members watching your gameplay live from Cologne.

Guild Wars 2 developers and community team members from ArenaNet will be at the booth to ensure that your Guild Wars 2: Heart of Thorns experience is top-notch. Are you part of a guild that’s meeting at gamescom? Be sure to come and visit us at the booth.

We’d like to see your Guild Wars 2 cosplays and props if you have them, so feel free to bring your creative work with you so other members of the community can witness and appreciate them as well. Don’t be shy—come and say hello to us; we’re a group of friendly people, we promise!

Can’t Make It to Cologne? No Problem!

We’ll have live social-media coverage from gamescom, and our community team will be posting daily updates on our social-media channels. We’ll also have other social-media activities, including chances to win cool prizes. Keep an eye on our official channels to find out more.

We hope this gives you a good idea of what we’re doing at gamescom, but if you have any questions, please reach out to us through our social-media channels, and we’ll give you more details.

See you in Cologne!