Friend/Ships One Year Later: Catching up With [POOF] 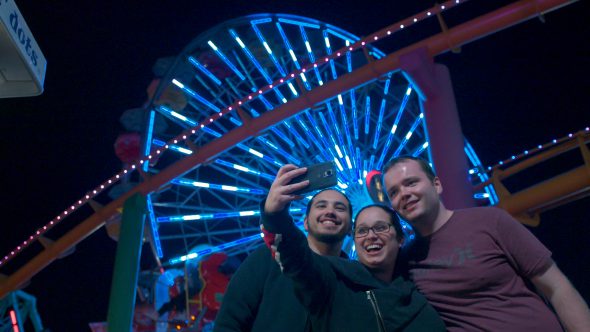 During last year’s Friend/Ships event we spent some time with officers of the [POOF] guild to learn about how they play together in Guild Wars 2, and you can watch the original video about them here. We followed up with Alex and Ryan to see how they’re doing!

Interviews have been lightly edited for length and clarity.

Question: It’s been a year since we teamed up for Friend/Ships. How have things changed for you?

Alex: So, that’s something, haha.

Ryan: Alex and I are dating!

Alex: Yeah, you guys and the Friend/Ships video are definitely to blame for that finally happening after six years of being friends and knowing each other.

Ryan: After the trip to L.A. in February for the video we really connected, and a few months later we made it official! Ten months later and about four or five trips back and forth, and Alex has decided to move up to Canada with me!

Alex: I’m actually headed back up in mid-February to experience “real” winter apparently haha, and get things set in motion for immigration and stuff.

Question: What’s your favorite way to play together?

Ryan: After initially getting to know Alex online, it’s amazing to meet in person and game together side by side. I think the best way to play is with people you love because the connections you make with people are what stick with you.

Alex: The dual battle station (even though it was just my travel laptop) set up at Ryan’s place every time I go up to see him is honestly the best. We’re both right next to each other so it’s just really lovely and comfy.

Question: Tell us about an especially powerful memory of playing Guild Wars 2 together in the past year.

Ryan: After recording the Friend/Ships video last February, Alex and I grew a lot closer. She came up to Canada to visit me a few months later and we were able to play our daily fractals beside each other. After playing every night online with her for so long, getting to play Guild Wars 2 in person with someone I cared about was really special to me.

Alex: My poor laptop tried its hardest, too. Challenge mode runs were…sketchier than normal! I have one memory that might not seem too special, but after I went back home from that visit both Ryan and I wanted to work on a new Gift of Exploration and instead of using characters that were leveled, we both made new ones and started fresh. So we went through map completion and it was just really relaxing and fun to spend time together working on something long term like that.

Question: What makes your adventures together unique?

Ryan: I’m not sure if our adventure together is all that unique—I read many stories like ours during the Friend/Ships campaign last year. However, all the deep connections people form through Guild Wars 2 amaze me; even though Alex and I are 1,600 miles apart we managed to grow so close together through the game, and I count myself very lucky to have found her. 🙂

Alex: I think what makes our adventures unique is the fact that they sort of transcend game genres. Things aside from Guild Wars 2, like strategy games or single-player console games where we’re both on the couch and trade off, or even an online D&D campaign (which Anthony and some of our other guildies are in!) are ways we’ve been adventuring together, and it’s all very special to me. There’s also the grand adventure of moving to another country for me that’s pending on the near horizon.

Question: Just for fun—do you have a story for your characters?

Alex: I’m a bit of an altoholic but my main for a long time was my asura guardian. I was a really active roleplayer a long while back, and one day I asked Ryan what his asura guardian’s name was since his in-game name was more of a title. Long story short: I penned a really silly blurb about them about five years ago, well before any threads of our relationship even began and now they’re our character “pairing,” if you will. I commissioned one of our friends, who we met through our daily fractal challenge mode runs for a drawing of them, and it’s super cute and has been my phone background since April.

Thank you for sharing your story with us, Alex and Ryan!

If you include the #GW2Giveaway tag as well, you could win great prizes—including a trip for two to gamescom 2019! Check out the official rules and regulations here.