Job-o-Tron’s Journey: The Evolution of a Gag

Writing for Guild Wars 2 is a hugely collaborative effort, and at times that collaboration transcends the sum of its parts. Sometimes a character takes on a life of its own and we, the humble chroniclers of that character’s life and times, are just as rewarded (and surprised) as the audience when we see where it winds up. 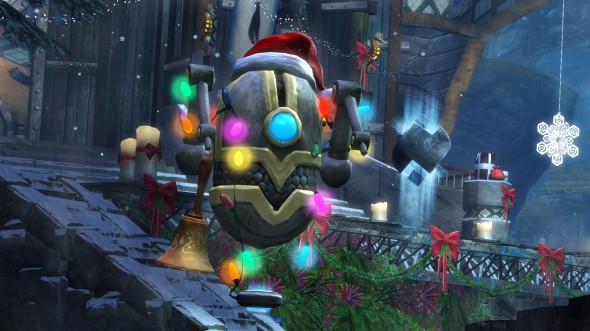 Case in point: the hapless and often put-upon Consortium golem that had a well-defined purpose until circumstances threw a few serious detours on its career path. Ladies and gentlemen, on behalf of the Guild Wars 2 writing team I give you: Job-o-Tron.

Lead Writer Bobby Stein, after a team meeting in which we discussed the Secret of Southsun release, cheekily opined that there should be an employment golem trying to bully the unhappy settlers into working for the Consortium. He suggested the line, “Get a job!”

And the wheels started turning…

I took Bobby’s idea and ran with it: an abusive jobs “counselor” who was in the Consortium’s employ for the express purpose of pushing the settlers to sign up for gainful employment as the Consortium defined it (in other words, with the Consortium). I decided this golem would be Subdirector Noll’s pet project, and would therefore reflect Noll’s fussy impatience with anything that hindered his agenda on Southsun Cove (and therefore hindered Noll’s chances of climbing the Consortium ladder).

Fun fact: Both Noll and Hobo-Tron have the same voice actor, Yuri Lowenthal. We toyed with the idea of having Hobo-Tron speak with Noll’s voice, processed to sound more mechanical and golem-like, but we ultimately decided it was funnier to have a different voice for Noll to play off of when they spoke to each other. Programmed to belittle, hector, and otherwise browbeat the hapless settlers of Southsun Cove, I knew there was a genuine risk of making Job-o-Tron truly hateful…so I decided to embrace that and make the most of it

Job-o-Tron’s saving grace (if such a thing exists) is the dénouement to its arc, when it sinks in that since the settlers have been released from the terms of their oppressive residency contracts, Job-o-Tron itself is now out of work. In a bitter piece of poetic justice, it realizes that it is now the sort of individual it was created and programmed to abuse. This proves too much for the series of magi-technical synapses that approximates its brain, and it has a bit of a breakdown. Depressed but ultimately accepting its sad lot in life, Hobo-Tron embraces its downward spiral, equips itself with the appropriate accoutrements, and sets out to wander the globe in search of a new purpose and a new source of income

As the August Living World team brainstormed the content we wanted to release, Writer Peter Fries and I agreed that we wanted to show players what had become of Job-o-Tron. As an entity that literally defined itself by its occupation but had lost its position with the Consortium, Job-o-Tron would rename himself to reflect his current job prospects (meager as those prospects were—there isn’t much of a market for the “aims snark and condescension at people who are down on their luck” skill set) and try to take advantage of the crowds and opportunities at the Queen’s Jubilee in Divinity’s Reach. Knowing our shared creation was in good hands, I turned over the reins of the newly rechristened Hobo-Tron to Peter and stepped back to watch my colleague work.

I loved the idea of a purposeless golem driven to reinvent itself and reassert its earning potential. The former Job-o-Tron washed up in to the Krytan capital in a tide of street entertainers and hucksters, all eager to make some quick coin from celebrants at Queen Jennah’s gala jubilee celebration. I saw an opportunity to give our golem a human foil, and envisioned a pathetic turf war between buskers over a patch of sidewalk outside the new Crown Pavilion. 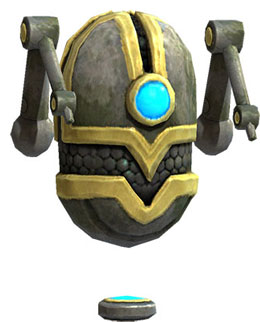 That’s how Hobo-Tron met Marcello DiGiacomo, a destitute minstrel voiced by Sam Riegel who won’t give up on his artistic ambition, even though it’s brought him nothing but misery. The golem began recording and replaying the street performer’s music to try to get in on some of his spare change action, and drove the minstrel into a righteous, defensive fury. Hobo-Tron obliviously seemed to think the two might become fast friends, even as the minstrel tried in vain to shoo it away.

Fun fact: voice actors Sam Riegel (Marcello) and Hobo-Tron (Yuri Lowenthal) are good friends in real life, so when we told them in the studio that they would be remotely arguing with each other in these scenes, both actors grinned evil grins and said words to the effect of, “That’s all I needed to know.”

I asked Maclaine Diemer to compose and perform a few tunes for Marcello, which also became Hobo-Tron’s tunes after the character swiped them (and after some post-processing by our audio team). Anthony Ordon did a masterful job scripting their exchanges so that periodically, when the local Seraph told the unlicensed buskers to move along, the two would retreat a small distance and then return to set up shop again. In between, huddled alone under a bridge, Marcello would moan, “I hope I die soon.”

I wasn’t ready to see these two disappear when Scarlet appeared to rudely shut down the festivities, so I had them taken hostage by some of her Aetherblade thugs during the attack. In the funhouse lair where Scarlet set up in the sealed-off pavilion, the minstrel and golem were forced to perform the supervillain’s musical theme over and over, while trading pleas like, “Have mercy. Kill that awful golem first,” and “I—would—be—better—utilized—as—a—hench—golem.”

Hobo-Tron and Minstrel Marcello were but two of Scarlet’s many victims, and they got off relatively light (in that they were both alive, intact, and not forced to parade around in red Speedos). The Writing Team decided that their “collaboration” with Scarlet did not go unnoticed by the other victims inside the Crown Pavilion or the Seraph, so both buskers soon found themselves in front of a Divinity’s Reach tribunal for entertaining the villain who bombed the Queen’s celebration and turned Jenna’s watchknights into fearsome twisted monsters. While the pair avoided jail time, they were obliged to do charity work for Wintersday in order to work off their sentences. 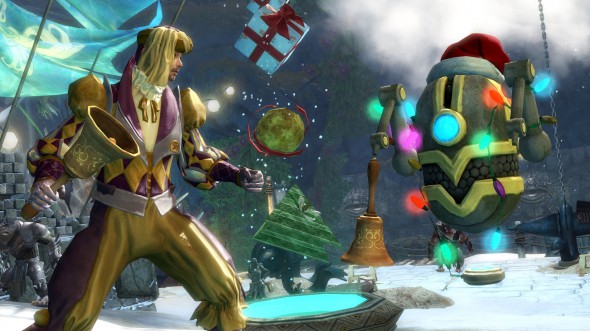 Enter Writer John Ryan, who took the baton from Peter and wrote another chapter in the ongoing Hobo-Tron/Minstrel conflict with a decidedly Wintersday flavor. Take it away, John.

It’d been a rough year in Tyria, and Wintersday should be a lighthearted escape, so when the Wintersday team began gearing up to bring back the holiday, I wanted to add something appropriately festive and fun to the release.

I wanted to bring back both the minstrel (the esteemed Marcello DiGiacomo) and Hobo-Tron, as they’d both be fitting for the comic tone of Wintersday I was looking for. But why would they be there? And why together? Last time around, they squabbled and bickered, even in the clutches of Scarlet. What in Tyria could bring them back?

Something in my brain shouted, “Community service!” and I couldn’t stop laughing. The notion of this hapless, bumbling pair of misfits being blamed and punished for Scarlet’s antics was solid gold. They’d be stuck in Lion’s Arch, soliciting donations—not for themselves like last time, but for people affected by Scarlet’s rampage.

My favorite part about writing Ho-Ho-Tron is that he isn’t noble, isn’t brave, isn’t a trustworthy machine companion-servant like all the other golems in Tyria. He’s a sly and cowardly robot that was built—and then fired by—a nefarious corporation. He’s a down-on-his-luck automaton stuck doing a job with a no-talent schmuck because he has to, during a holiday that means nothing to him.

We don’t know exactly where our intrepid employment-seeking golem will wind up next, but once we nail down the details we definitely share it with our players. As long as there’s a job to do (that can be done by a down-on-its-luck golem with few practical skills), it’s a safe bet Job-o/Hobo-/Ho-ho-Tron will be there. 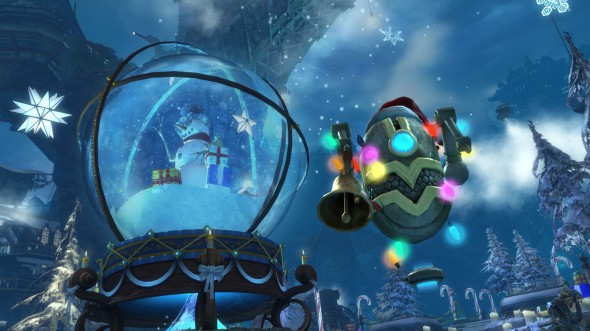