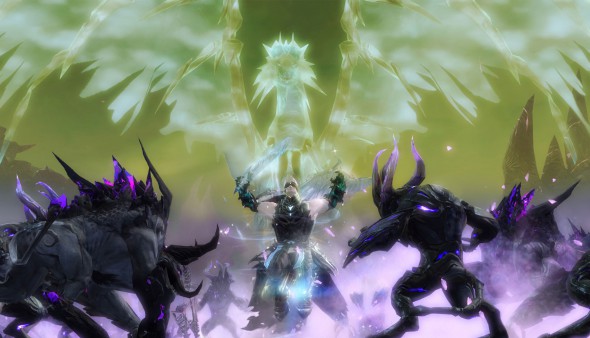 The legend for Legendary Dragon Stance is Glint. We chose the name herald for this elite specialization because we thought it was fitting given Glint’s actions in the past. In the original Guild Wars®, Glint compiled the Flameseeker Prophecies, foretelling events such as the defeat of Vizier Khilbron as well as the fall of the titans and the mursaat. Much of what she predicted came to pass. She was a protector of Tyria and a herald worth heeding.

First we’ll discuss the shield. The shield is primarily a defensive weapon used to help survivability for you and your allies, and its skills provide both healing and boons to help sustain you in the thick of battle. The Glint skills generally provide more benefit when you stay close to fights to aid your allies, so the shield can help complement that playstyle very well. Crystals, energy, and parts of Glint are a visual theme across the shield and utilities. Let’s check out the shield skills.

Channel a shield from the Mists to protect you and regenerate health. You take no damage from attacks, and conditions cannot be applied to you. 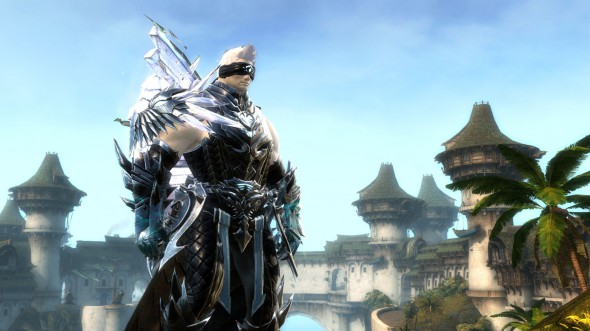 The Many Facets of Glint

If you played the original Guild Wars or are familiar with it, then you may know a thing or two about Glint and her facets. In the Prophecies® campaign, players had to fight the six facets of Glint before reaching her. We wanted to add all six of the facets to this legend.

Each facet is represented as a skill. Glint is all about upkeep skills, which are unique to the revenant profession. They cost energy to keep active, so you’re trading potential energy regeneration, which can prevent you from using other skills.

All five skills on the right half of the bar are upkeep skills, as is the added second profession mechanic skill, Facet of Nature, which I’ll explain below. When activated, each facet pulses beneficial effects to nearby allies as long as it’s active. While a facet is active, you’ll gain access to a new skill that you can use to consume the energy of that facet for a more potent skill at the cost of setting both on recharge. Each one of the active skills that consumes the facets is visually represented with different parts of the dragon Glint. Let’s look at some examples.

Consume Facet of Elements to have magical dragon breath cover the target area.

Consume Facet of Chaos to damage and knock back foes while granting super speed to allies.

The heal skill, three utility skills, and the elite skill account for five facets, but there’s still another facet to reach the total of six. Facet of Nature will be a special facet, as it can be used no matter which legend you’re currently invoking. Like the others, it’s an upkeep skill, but it’s designed to tie in with the other five.

Consume Facet of Nature to unify with the other facets, granting allies the boons the facets provide. 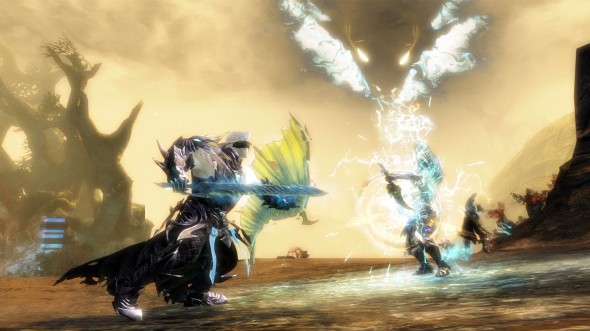 There’s been some discussion since the revenant test weekend event about underwater combat for the profession. For starters, I’ll be going over some of the spear skills for the revenant. By the next time you get to play, some of the legends will be converted to function underwater as well.

For the spear, we took a hybrid approach, making sure to appeal to both physical and condition-damage styles of play. We’ve also tried something a bit new with the weapon to complement this—there are two autoattacks for the first two skill slots of the weapon.

Throw a spear from the Mists toward your foe. Inflict increasing durations of torment the farther away your foe is from you.

Rapidly strike foes in front of you, inflicting vulnerability.

Just like having two autoattack skills, some of the other underwater skills are set up to provide a more varied playstyle. Generally the first skill will be more condition focused, and it’ll flip over to a skill focused on physical burst damage. In the next skill, you’ll see an example of that.

Launch a sphere outward from the Mists. The sphere will attack nearby foes as it travels, poisoning them.

Detonate the sphere, damaging and chilling foes when it explodes.

Create two rifts, one above and one below your target. After a short delay, these rifts will create a barrier from the Mists that prevents foes from crossing it.

Well, that’s all for today, folks. Make sure to check out the upcoming Points of Interest livestream this Friday on the official Guild Wars 2 Twitch channel to see all of the things I discussed today. Also be on the lookout for upcoming Beta Weekend Events, where you can try out these things firsthand!

See you all on the battlefield!