Slashing, Devastation, and a Memorable Assassin 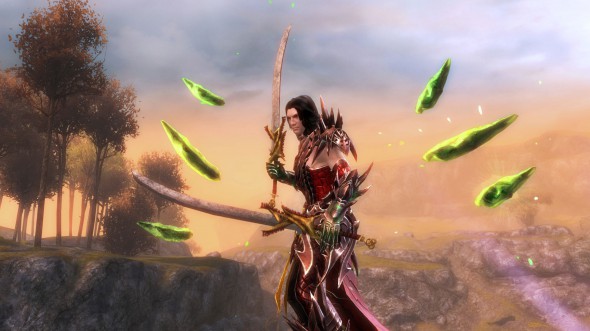 Welcome, Tyrians! I’m Roy Cronacher, and today I’m here to bring you information about the last core legend and weapon set for the new revenant profession. In the previous blog, I discussed the staff and the Ventari legend. If you missed it, you can check it out here.

We’ve been discussing this legend and weapon set since we first mentioned the revenant profession and how it called upon legends of the past. Currently we offer a defensive set, a condition set, and a support set as legend options. Now, I think there might be one missing. Oh, right, a physical-damage-focused legend! How about a dark and sinister one? Let’s add lots of slashing and mobility into the mix. Let’s also make sure it’s a name worth remembering. I’m happy to announce the infamous assassin Shiro Tagachi as the next revenant legend!

Since you never see Shiro without his iconic blades, we just couldn’t leave them out. Revenants will gain access to dual-wielded swords to match the Shiro playstyle and complete the full image. 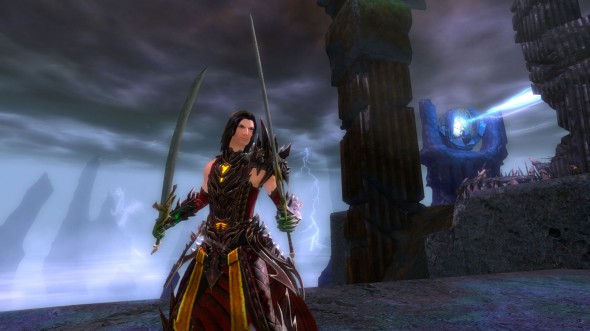 Slashing, Mist-manipulating attacks, and pure destruction are what the sword set is all about. We wanted to use rapid, flashy attacks to fit the assassin theme of Shiro Tagachi as a legend.

Rift Slash“Slash foes, creating a rift on them that explodes for additional damage after a short delay.”

Precision Strike“Strike nearby foes with precision, sending out blades that damage and chill them.”

Unrelenting Assault“Unleash a fierce attack on nearby foes, shadowstepping to foes in the vicinity and delivering strikes. Gain might each time you strike a foe.” 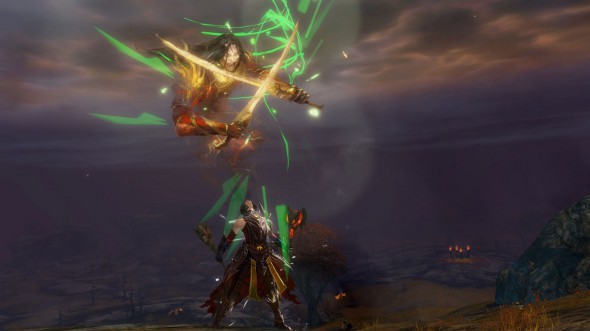 Shiro Tagachi is definitely an iconic character in Guild Wars® lore. As with our other legend choices, we wanted to offer a good variety of very notable characters and creatures. For the physical-damage legend, we wanted someone who would make sense for high mobility and have a darker theme. Shiro was the obvious choice. If you enjoy damage, quick attacks, and mobility, I have a feeling Shiro will be a good fit for you.

Enchanted Daggers“Enchanted daggers will strike your target as you attack, siphoning life from the damaged foe.”

Phase Traversal“Step through the Mists to your target, and make your next few attacks unblockable.”

Jade Winds“Call upon the Jade Wind to turn nearby enemies into jade, stunning them for a short duration.”

Now that we’ve talked about dual swords and the last legend, we have a complete set of core weapons and legends for the revenant profession. Let’s take a second to recap:

Anyone who has pre-purchased the Guild Wars 2: Heart of Thorns expansion will be able to try out the full core revenant experience in our upcoming beta weekend events. I’ll definitely be online playing one, and I hope to see you all trying out the revenant as well. I’ll be patiently awaiting your thoughts and feedback.

See you all on the battlefield!