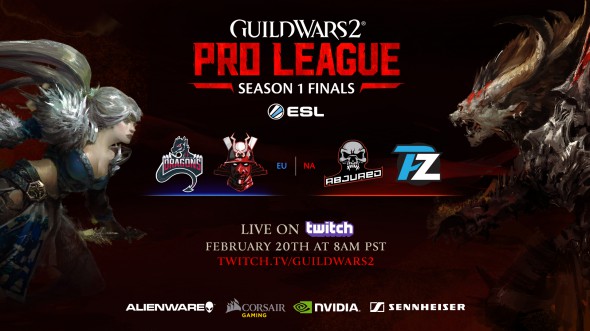 Who doesn’t love a good old-fashioned rivalry? It’s time to see what these pro players can do on the international stage with a new meta thrown into the mix.

The ESL Guild Wars 2 Pro League Season Finals will be live on Twitch this Saturday at 8:00 AM Pacific Time (UTC-8). You’ll also be able to watch the broadcast in Chinese, French, German, and Spanish.

If you’d like to get up to speed on the event, Joe “Storm” Nowasell—who will also be featured on the analyst desk for the event—has provided a full breakdown of what to expect at the season finals at AcademyGamingNet.com (English only).

As a reminder, we’ll be enabling the Greater Call of the Mists bonus (+15% PvP rank-point gain, +25% reward track progress, and +200% magic find in PvP) from today until Monday. Fans who tune in to the livestream on Saturday can enter into one of our many swag giveaways, featuring Corsair and Sennheiser peripherals, gem codes, and—for a lucky few—a choice of one of the original precursor weapons.

We’ll see you there!