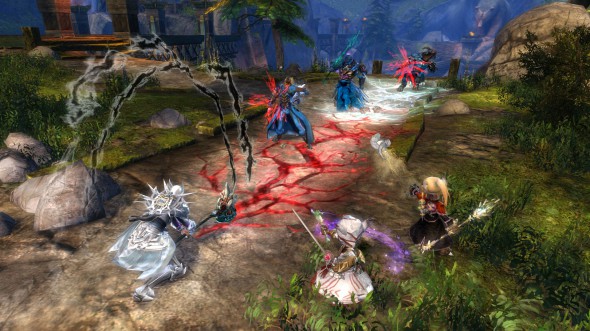 Regardless of whether you’re a novice or a veteran, there’s a community-run tournament that will satisfy your competitive needs!

Good luck, and we’ll see you in the Mists!

Academy Gaming’s North American Weekly Tournament features a way for both teams and individuals to get in on the action. Don’t have a team? That’s fine! In the Academy Gaming Weekly Tournament, solo players are able to sign up as free agents and will be paired with other individuals to battle against other free-agent teams. If you’re entering with a group of friends, test your mettle against other premade teams and see if you’re able to claim the winning prize. Academy Gaming restricts Pro League players from participating in this tournament, which creates a friendly environment for players who enjoy lighter competition.

Operated by one of the leading North American Pro League teams, the Never Lucky Weekly 2v2 tournament is a place to show off your mechanical prowess and game knowledge. In conquest matches, you have to worry about rotations and matchups in addition to playing your profession well. In the NL 2v2, you can just pick a build, execute your strategy to the best of your ability, and the best team wins.

The longest-running 2v2 tournament in Guild Wars 2, the ESL Weekly 2v2, is open to any and all players. With no map mechanics or objectives in the mix, the only thing that will set you and your opponent apart is raw skill and cunning.

The ESL Weekly Cup is the best place for new players to rub elbows with the pros and learn how to improve their game, with up to 16 teams competing in a single-elimination, best-of-three tournament.